The Next Step Live - The Movie 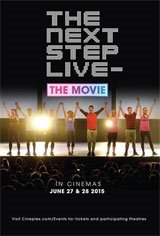 Chronicling the onstage and backstage experience of eight cast members - Brittany Raymond, Isaac Lupien, Jennifer Pappas, Jordan Clark, Lamar Johnson, Trevor Tordjman, Victoria Baldesarra and Taveeta Szymanowicz - from the popular Family Channel series The Next Step as they travel across Canada to perform their dance concert in front of sold-out crowds during a two month period.

The film, shot in 2015, features exclusive footage of the dancers as they prepared for their first-ever tour, including behind-the-scenes on the bus, backstage, live performances and meeting fans, as well as exclusive interviews with cast members.