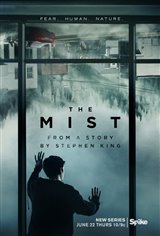 When a soldier (Okezie Morro) warns the police that there's something in the mist that's rolling towards a small town, he's thrown in jail. As the all-enveloping mist approaches, bodies begin piling up. The murders are at first attributed to a bear gone rogue, but the townspeople soon realize that the strange creatures appearing in the mist are much deadlier than a bear.

The townspeople stay inside and lock their doors once they realize that anyone who goes out into the mist winds up dead — everyone, that is, except for Alex Cunningham (Gus Birney).

Based on a story by Stephen King.