The Miracle of the Little Prince 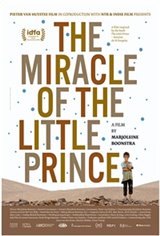 The Little Prince, Antoine de Saint-Exupéry's celebrated philosophical children's book about friendship, love and respect, is one of the world's most widely translated literary works.

In The Miracle of the Little Prince, Marjoleine Boonstra visits the people who have translated this little masterpiece from French into Tibetan, Tamazight (North Africa), Sámi (northern Finland and Scandinavia) and Nawat (El Salvador). All of these languages are under threat.

Passionately enthusiastic language researchers, teachers and translators talk about how the observations of an alien prince on earth are interpreted in their own culture.

They also recall the first time they read the book, and, naturally enough, discuss the linguistic challenges they faced how do you translate water faucet if there's no such term in your world?

This original approach and the exquisite, calm cinematography allow for the telling of personal stories that are as bizarre, human and painful as the experiences of the titular prince. It's a film that inspires wonder a testimony to the imagination and the solace and liberation it offers.