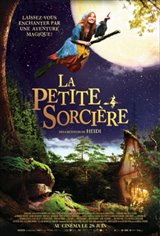 Although she’s 127 years old, Rita is still considered a child and an apprentice in the witch community. When she tries to sneak in to the important witch celebration on Walpurgis Night at Brocken Mountain, she’s caught. As punishment, she has to learn all 7,892 spells from the great book of black magic book in one year. Diving headfirst into the task, she gets encouragement from her talking raven, Abraxas, but the evil witch Rumpumpel tries everything to distract her. When it’s discovered that Rita uses the spells she’s learned to help humans, the "young" student violates the first rule of witches, which is to do evil. Punished again, Rita prepares her revenge.