The Life Ahead (Netflix) 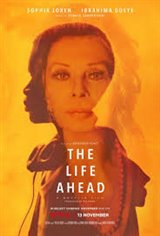 In seaside Italy, a 12-year-old orphan named Momo (Ibrahima Gueye) knows Madame Rosa (Sophia Loren) as a woman who looks after the children of hookers. The elderly man who has been looking after Momo realizes he just can't do it any longer and asks Madame Rosa if she can take care of him. She recognizes him as the boy who robbed her in the street, so she's reluctant, but finally agrees to take him in for two months, but not a day more.

However, rather than being thankful at having a roof over his head and food to eat, he first disses the home and then gets into fights with the other children. Overtime, he slowly finds his way and gets to know Madame Rosa, who has a number tattooed on her arm from when she was in a Nazi concentration camp, when she was his age. He realizes that she's seen her share of trouble, which helps him feel bonded to her. Momo comes to realize that he can't survive on his own on the streets—that he needs Madame Rosa, who has grown fond of him as well.