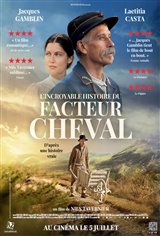 Drôme, late nineteenth century. Joseph Ferdinand Cheval, a postman whose first wife died of cold and hunger, has his young son, Cyril, taken away because he’s deemed incapable of raising him. Months later, Cheval meets Philomène Richaud, a widow. They marry and have a daughter, Alice. Cheval adores the girl. Although he spends 10 hours a day delivering mail, he decides to take on a crazy project for his young daughter: to build with his own hands, using disparate materials, an "ideal" palace whose quirky architecture is inspired by Alice’s love of travel stories and dozens of exotic postcards that he has amassed over the years. Against all odds, in a country with a sometimes harsh climate, the postman spends his free time building this extravagant castle, whose fame goes beyond the French borders. As an adult, Cyril, who has become a tailor in the village, contributes to the project, which spans a period of 33 years.