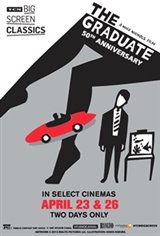 So it's understandable that Ben's dream girl Katharine Ross is a bit startled to learn that he's sleeping with ... her mother.