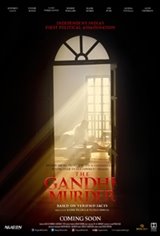 The Gandhi Murder, a full-length feature film, that will question the history and truth, that billions of Indians across the world, believe about Mahatma Gandhi's death.71 years after his tragic death at the hands of the Hindu right-wing nationalist, Nathuram Vinayak Godse, 'The Gandhi Murder' delves into the political events leading to the assassination that changed the future of Independent India.