The Game of Their Lives 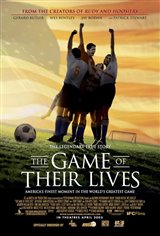 In the spring of 1950, the United States was extended an invitation to compete in the World Cup in Brazil. Faced with budgetary restrictions and no official soccer team to call their own, the U.S. set out to recruit players in the soccer hotbed of St. Louis, Missouri, where they found a group of young friends with no professional or international playing experience, only an unabashed love of the game.

Leaving behind their wives, girlfriends and families for New York, the team members joined Philadelphian Walter Bahr, Haitian-born New Yorker Joe Gatjeans and additional East Coasters for a short 10-day training period in which these young men from different races, religions and backgrounds were forced to see past one another's differences and become a full-fledged team.