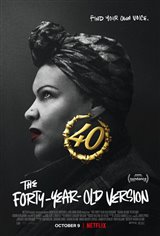 Radha (Radha Blank) is a 40-year-old New York playwright who teaches a playwriting class to ambivalent high school students. Once a successful playwright who won a 30 Under 30 Playwright's Award, she hasn't had a success in amost a decade.

Her agent/friend Archie (Peter Y. Kim) drags her to a posh event for theater producers and advises her to dust off her latest play, Harlem Ave., in order to present it to Broadway theater manager Josh Whitman (Reed Birney). However, Whitman insists her show about Harlem gentrification has to include a prominent white character and finally suggests she write for an upcoming Harriet Tubman musical instead.