The Fireflies are Gone 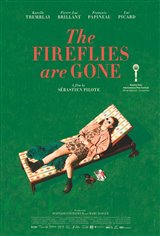 In an old industrial town, Léo (Karelle Tremblay) has just completed high school, without any concern about her future. Léo is routinely rude to her stepfather, whom she considers responsible for her parents' breakup. Her father is out of the picture, having moved north. Léo's mother decides she doesn't need the girl and her poor attitude just hanging around the house all summer, so she insists Léo get a seasonal job.

Léo reluctantly takes a job as the night custodian of a public park’s baseball field, for lack of anything better. By chance, she meets Steve (Pierre-Luc Brillant) in a diner, and discovers he gives guitar lessons. Despite the fact that he's twice her age and lives in his mother's basement, she buys a guitar in order to have an excuse to see him again.