The Emperor of Paris 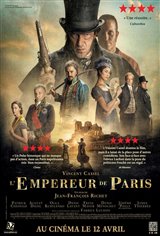 France, late 18th century. Sent to prison, career criminal François Vidocq meets fellow inmate Nathanael de Venger and the two men manage to escape and get free. In 1804, Vidocq resurfaces in the streets of Paris, posing as a cloth merchant. When he’s spotted, he’s captured by police officer Henry, and framed by former cellmates for a murder he didn’t commit. After once again escaping, Vidocq spots and captures the two real killers, whom he then delivers to Henry. Impressed by his knowledge of the criminal milieu, Henry makes a deal with Vidoq. If he hunts down the thieves and murderers of the Parisian underworld, he’ll be set free.