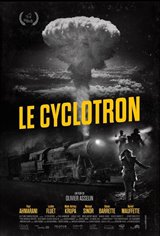 On a train in 1944, Simone, a French physicist hired by the British Secret Service, is tasked with eliminating Emil, a Swiss colleague and ex-lover, if she’s convinced he’s succeeded in developing an atomic bomb to give to the Germans. Captured and interrogated by Officer König, the two scholars pretend not to know each other and converse in coded language. Simone discovers that Emil has in his possession a bomb that works in conjunction with a mini-cyclotron, which can be activated by a watch.

However, according to a principle of quantum mechanics, the instability of the atomic particles could cause the bomb to explode either in Paris or in Berlin, depending on the direction taken by the train during a switch. While Simone manages to escape, König takes refuge in an underground bunker with his men and Emil is seriously wounded in the leg.