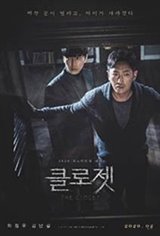 When a tragic accident leaves Sang-won (HA Jung-woo) and his daughter Ina (HEO Yul) without their wife and mother, he moves to a new home to restore his relationship with his daughter. Despite all his efforts, nothing he does seems to work but she makes a new friend who makes her laugh.

This moment of peace doesn't last long, as strange noises trickle out of their closet and Ina begins displaying strange behaviors. A few days after Sang-won starts having eerie nightmares, Ina disappears without a trace.

While searching for her, Sang-won comes across enigmatic Kyung-hoon (KIM Nam-gil), who seems to know where Ina has disappeared to: the closet. Kyung-hoon tells Sang-won that he's been looking for whereabouts of missing children for the past 10 years and believes that the key to finding Sang-won's daughter is inside the closet.

Desperate to find his daughter, Sang-won reaches out to open the forbidden closet.