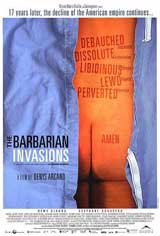 In his early 50s and divorced, Rémy is in the hospital. His ex-wife pleads with their son Sébastien, a very successful businessman in London, England, to come home. Sébastien hesitates — he and his father haven’t had much to say to each other for a very long time — but ends up agreeing to return, along with his French wife, to help his mother out. As soon as he arrives, Sébastien does everything in his power to get a clear diagnosis of his father’s health and to reduce his suffering. Using his creativity and his contacts, not to mention bribery, Sébastien turns the system upside down to obtain better conditions and a bit of happiness for his father. In the meantime, relatives, friends and lovers flock to Rémy’s bedside to offer support, settle scores and take a facetious look at their own existence.