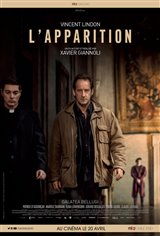 Traumatized from an assignment in the Middle East during which his photographer was killed, reporter Jacques Mayano is suffering from depression when Vatican authorities give him a delicate assignment. He’s asked to conduct a canonical investigation of an 18-year-old orphan, Anna, who claims to have received two visits from the Virgin Mary.

Since then, her village priest in the south-east of France has taken her under his wing and cut ties with the Vatican. And for good reason: the supreme authority of the Church is skeptical about the veracity of this story, which has turned the site of the apparitions into a place of pilgrimage and the fragile Anna into a circus freak.

Dispatched on site with a committee of theologians and a psychologist, Mayano tries to shed light on this case, which includes an investigation into Anna’s past.