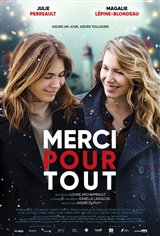 A few days before Christmas, the sudden death of their father forces estranged sisters Marianne and Christine to meet after not speaking to each other for nearly a year. Marianne, a popular author and blogger, seemingly has an ideal life with her politician husband and their children. Christine, the younger of the two, is single and her life is in perpetual disarray. A singer/songwriter, she makes ends meet by singing at elderly residences and office parties. The sisters decide to take their father’s ashes to the Magdalen Islands, where he grew up. The girls are unaware, however, that their father was involved in shady dealings and had recently returned from Panama with compromising photos of a financial crook. The latter sends Réjean, his henchman, to get the photos back. A misunderstanding sets this killer in pursuit of Marianne and Christine.