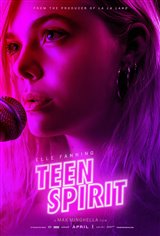 Violet Valenski (Elle Fanning) is a Polish-born British teenager living on the Isle of Wight. She dreams of becoming a professional singer, but she lives in a small town where she works as a waitress, goes to school and helps her single mother with the chores on their small family farm.

Violet occasionally sneaks out of the house to perform at open mic night at a pub, where a retired opera singer named Vlad (Zlatko Buric) takes notice of her talent. When a singing competition called Teen Spirit rolls into town to hold auditions, Vlad encourages her to take part. She does and wins a spot to go to London to be one of the entries in the televised competition, with a grand prize of a recording contract being offered to the eventual winner. With Vlad as her manager/mentor, Violet heads to London with high hopes of escaping her humdrum life.