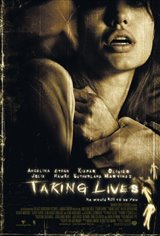 A top FBI profiler, Special Agent Illeana Scott (Jolie) doesn’t rely on traditional crime-solving techniques to unravel the mysteries of a murderous mind. Her intuitive, unconventional approach often makes the crucial difference between catching a killer and sending a dead-end case to the cold file. When Montreal detectives handling a local homicide investigation reluctantly ask for an outsider’s help to get inside the head of a cunning serial killer, Agent Scott joins the case. With meticulous insight, she theorizes that the chameleon-like killer is "life-jacking" -- assuming the lives and identities of his victims.

As the pressure mounts to catch the elusive murderer, Agent Scott’s unorthodox methods alienate her from a territorial police team that feels threatened by her uncanny abilities. Her seemingly cold demeanor belies an unparalleled passion for her work, and she’s at her best when she’s working alone. But when an unexpected attraction sparks a complicated romantic entanglement, the consummate specialist begins to doubt her finely-honed instincts.

Alone in an unfamiliar city with no one she can trust, Agent Scott suddenly finds herself on a twisted and terrifying journey, surrounded by suspects in a case that has become chillingly personal.