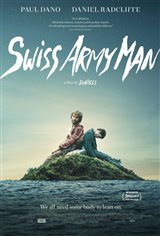 Hank (Paul Dano) is stranded on a deserted island, having given up all hope of ever making it home again. He hangs a rope around his neck and is about to give up when he spots something on shore that inspires a rejuvenated sense of possibility.

As Hank approaches this beacon of hope, he discovers it's the corpse of a man named Manny (Daniel Radcliffe). He uses the flatulent corpse to his advantage and takes him back home to the mainland. But they are still lost and Hank tries to search for scraps of food to survive. The two become friends and ultimately go on an epic and surreal adventure, battling violent bears along the way. Hank also tells Manny about his love life and their goal is then to reunite with her.