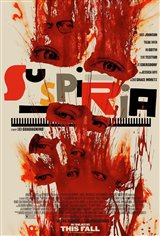 Susie Bannion (Dakota Johnson) has dreamed of studying at the prestigious Markos Dance Academy in Berlin since she was a girl growing up in a religiously conservative family on an Ohio farm. She arrives there and immediately impresses the school's artistic director, Madame Blanc (Tilda Swinton).

Just before Susie's arrival, another dancer, fellow American Patricia Hingle (Chloë Grace Moretz), flees to join the Baader-Meinhof gang of leftist militants who are causing a commotion in Berlin, and more importantly, because she's discovered Madame Blanc is the leader of a coven, whose charges are influenced in a variety of ways by the supernatural aspects of the school. Susie begins to have terrifying nightmares as her star quickly rises at the school.