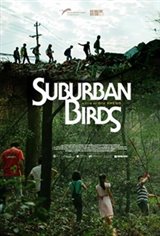 A striking debut from China's Qiu Sheng, SUBURBAN BIRDS is a tantalizing mystery and a bittersweet coming-of-age comedy rolled into one. Hao (Mason Lee) is part of a team of young engineers called in to investigate a series of craters that have opened up on the edge of the city.

As he and his team survey the subsiding area, another story is taking place in the same suburban landscape. A younger boy, also named Hao, spends long afternoons playing with friends and making mischief until one-by-one, his playmates start to disappear. As these parallel stories unfold, the connections between them proliferate and grow stranger.