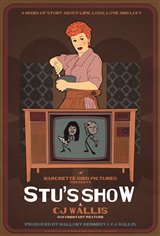 Shostak got his start handing out tickets to Norman Lear sitcom tapings to people in Hollywood and parlayed that into doing audience warm-ups prior to tapings for shows such as All In The Family and One Day At A Time.

The film also indirectly tells the story of television legend Lucille Ball who, in contrast to how she was portrayed in a recent biopic, was an extremely kind and generous person who treated those around her like family. When Ball is hired to hold Q&A’s at a Los Angeles based college, it alters the course of Stu’s life. His encyclopedic knowledge of Ball’s career earns his way into becoming an essential part of her small inner circle as her archivist and assistant to her husband Gary Morton.

After Ball passes away, Shostak pioneers what we know now as podcasting — hosting internet shows interviewing celebrity cast and crew of the golden age of television. He also co-produces the widely successful "Loving Lucy" conventions that welcomed prior cast, crew and superfans from around the world to come together for a few days to celebrate their love of I Love Lucy.

At one of these conventions Stu meets Jeanine Kasun, a music teacher and Lucy super-fan. The two eventually begin dating until Jeanine suffers a brain aneurysm and the two, alongside the legends of television, enter into a war with the medical industry to keep her alive.