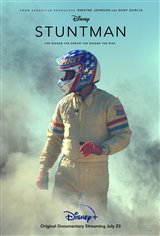 That is, until he's presented with the stunt that first inspired him — Evil Knievel's infamous Snake River Canyon rocket jump that was broadcast live on television — and which almost killed the famed daredevil. This documentary chronicles Eddie's swan song to close out his career with this dangerous stunt.