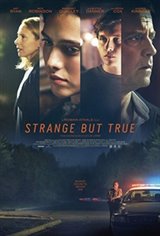 Five years after Melissa Moody (Margaret Qualley) survived a car crash that killed her boyfriend, Ronnie Chase (Connor Jessup), she turns up on the doorstep to tell Ronnie's mother Charlene (Amy Ryan) and brother Philip (Nick Robinson) that she's somehow miraculously pregnant with Ronnie's child. She insists she hasn't been with anyone else and can't find any explanation for her condition other than that the child is Ronnie's.

Charlene is angry and asks the girl to leave, but Philip, although he's incredulous about Melissa's claim, sympathizes with her obvious sincerity. Charlene, a retired librarian, spends hours researching medical journals about possible alternate pregnancies, such as posthumous sperm collection.

When the truth behind Melissa's pregnancy is exposed, it's so horrible that it puts not only her, but the Chase family in danger.

Based on the novel by John Searles.