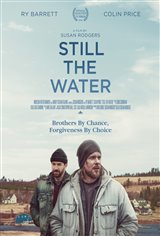 All eyes are on Jordie MacAulay (Ry Barrett) when he returns to his small hometown on Prince Edward Island after playing semi-pro hockey in Alberta. Usually in an alcoholic haze, he's kicked off his team after injuring another player.

With no friends, no job, and no respect, in desperation he turns to his family for emotional support help as he tries to land a job fishing, but the locals remember his past. Despite being sober since the death of his mother, many still hold hard feelings towards Jordie, including his ex-girlfriend.