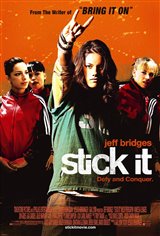 Rebellious 17-year old Haley Graham (Missy Peregrym) is a natural athlete who has gotten very good at defying both authority and the laws of gravity. Haley's single dad finds it next to impossible to keep his teenage daughter in line. For her and her neighborhood-cruising, dirt bike riding friends, there is no jump or course that's too intense for Haley to try—just dare her.

But after her latest run-in with the law, a judge sentences Haley to do time at Vickerman Gymnastics Academy, run with military regimentation by legendary hardnosed coach Burt Vickerman (Jeff Bridges). It's a return to a world she knows all too well—a former Junior Finals gymnastics champion herself, Haley inexplicably walked out in the middle of the prestigious Championships competition, betraying her teammates, scrapping her own Final Championships aspirations and trashing her reputation in one afternoon.

Coach Vickerman knows talent when he sees it, and he's committed to helping Haley come back to a world she could easily rule. What begins as a battle of wills between coach and athlete soon evolves into guarded mutual respect, and Haley's talent and one-of-a-kind personality galvanize the squad, who find a hero in their new teammate and learn that, along the way, some rules are meant to be broken.