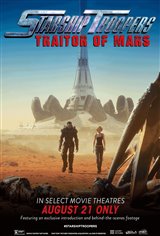 In STARSHIP TROOPERS: TRAITOR OF MARS, Johnny Rico has just been demoted and sent to a small satellite station on Mars whilst the Federation attacks the bugs’ home planet. While trying to train his new recruits on this remote quiet station, the bugs show up in a surprise attack but the Federation’s Fleet is too far away to help. It’s up to Rico and his Troopers to save the planet and uncover how the bugs made it so close to home.