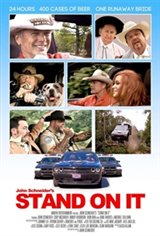 This tribute to the 1977 classic Smokey and the Bandit follows an aging TV franchise actor Duke Marietta (John Schneider) as he takes a bet that he can get a truck full of micro-beer from Texas to Louisiana in 24 hours.

This comedy mirrors its predecessor as Duke drafts his country star friend Roy (Cody McCarver) to drive the truck, while Duke drives a modified Dodge Hellcat that looks oddly like the Trans Am used in the original. Along the way, Duke picks up a runaway bride (Mindy Robinson) who is on the run from a larger-than-life backwoods Louisiana Sheriff Cletus T. Necessary (Tyrus), and his dim-witted offspring, Sonny (Dion Baia). Hilarity ensues.