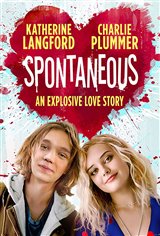 When a classmate suddenly explodes as Mara (Katherine Langford) leans under her desk to get a pencil she dropped, her fellow students panic. Covered in blood, they run screaming into the hallways. Mara, who has blood only on her shoes, seems to take it all in stride. But when another senior student explodes, and then another, it becomes obvious that whatever is happening is only affecting the seniors of Covington High.

Realizing that anyone could be next, fellow senior Dylan (Charlie Plummer) admits he has had a crush on Mara for awhile. They begin to hang out together, but things get complicated as more and more of their classmates explode like blood-filled balloons. The seniors are given medicine after being put in lockdown for testing and questioning in an effort to keep the outbreak under control.

When it keeps happening, Dylan and Mara decide to live their lives like there’s no tomorrow.

Filmed in Vancouver, BC. Several cast members are Canadian, including Hayley Law.