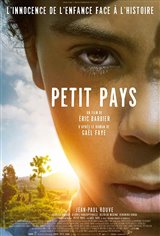 Burundi, 1993. Gabriel, 10, and his little sister Ana, feel helpless when their French father and their Rwandan mother separate. At the same time, Burundi experiences its first free election. The Tutsi, who have held the government since colonial times, are supplanted by the Hutu majority, which brings its candidates to power. Shortly after the election, violent clashes between the two ethnic groups increase. In neighboring Rwanda, this conflict degenerates into genocide just a day after the simultaneous assassination of the president, who was of Hutu origin, and his counterpart from Burundi. Gabriel, who is Tutsi through his mother, is horrified by these conflicts, although they wind up bringing his parents closer together.