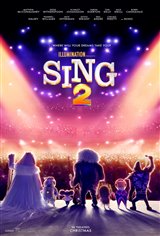 A whimsical group of animal musicians are about to audition for a talent show when the ruthless business-wolf Jimmy Crystal (Bobby Cannavale) slams the red button, ending their chance at success. Jimmy says that he is looking for a "big idea," and that's when Gunter (Nick Kroll) says that he knows Clay Calloway (Bono), a washed-out but infamous musician.

The producer loves the idea and with his approval, the crew goes to search for Calloway in hopes of getting him to find his voice after 15 years in recluse. Meanwhile, Buster Moon (Matthew McConaughey) plans an ambitious new show in the big city, putting the skills of skills of Meena (Tori Kelly), Rosita (Reese Witherspoon), Gunter (Nick Kroll), Johnny (Taron Egerton) and Ash (Scarlett Johansson) to the test while encouraging them to work together to pull it off.