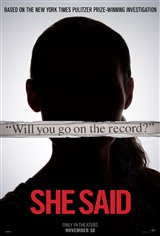 Two New York Times reporters — Megan Twohey (Carey Mulligan) and Jodi Kantor (Zoe Kazan) — are trying to investigate several cases of sexual harassment in the workplace. Their search eventually leads them to Harvey Weinstein, but It doesn’t take long for the reporters to realize that this is a much bigger story than one man.

This is about an industry that is protecting abusers. From phone taps to pay outs, these two journalists discover just how corrupt the industry is. Then comes the task of getting women who have been previously silenced to agree to tell their story publicly.