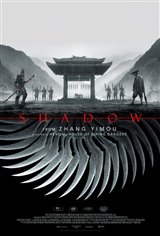 In Pei, a kingdom ruled by a young and unpredictable king, the military commander faces peril both inside and outside the palace walls. But he has a secret weapon: a "shadow", a look-alike who can fool both Pei's enemies and the King himself. In his obsessive quest for a long-sought victory over a rival kingdom, the commander must execute an intricate plan involving his wife, the Shadow, and the kings of both kingdoms, leading up to a stunning invasion unlike any seen before.