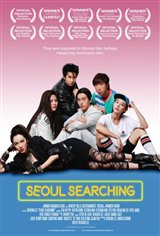 Seoul, South Korea, 1986. The Korean government has formed a summer camp for "gyopo" or foreign-born teenagers, who were sent by their parents to learn more about what it means to be Korean. Despite the best intentions, the raucous, hard-partying group of teens quickly turn the program into a joke.

This romantic teen comedy focuses on three boys from America, Mexico, and Germany, and the three girls they meet that change their lives forever.