See You Up There 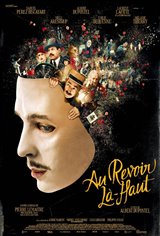 November 9, 1918. Despite the announcement of the upcoming signing of the Armistice, a deceitful lieutenant named Pradelle provokes a final confrontation against the German camp. While working to save the life of his comrade Albert Maillard, Édouard Péricourt has his lower face torn off by mortar fire. Saved at the point of death, he recovers in a military hospital, where he develops a dependence on morphine. Fearful of being sent back to his father, a powerful and distant Parisian banker, Édouard convinces Albert to help him take on the identity of a homeless person who died in combat. In 1919, the two men settle in Paris in a modest home, where Edouard, a talented artist, conceives of a scam to denounce the patriotic hypocrisy — he’ll send a catalog of sketches of monuments honoring the dead in an effort to collect advance money on orders they have no intention of fulfilling. To finance this project, Albert, an accountant by profession, begins working for Edouard's father.