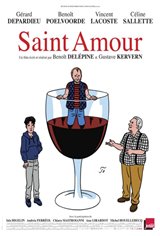 John, an elderly farmer who is mourning his late wife, attends the largest agricultural fair in Paris with his son Bruno, hoping to win the grand prize with Nebuchadnezzar, his champion bull. Bruno, a single man who’s dangerously fond of the bottle, is quick to shirk his responsibilities to instead tour the winemakers exhibits.

In order to get closer to his son, whom he hopes to see succeed him on the farm, John asks Bruno to accompany him on a tour of vineyards. They hop into a taxi driven par Mike, a young Parisien who’s also a pathological liar. The two travel to various wine regions from Burgundy to Bordeaux, through the Loire. Their route will be punctuated with unexpected encounters with various people, including a redhead that will radically change their father/son relationship.