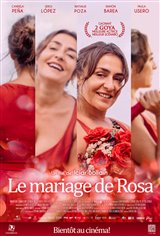 A seamstress for a film studio in Valencia, Rosa is always available to work overtime, whether it’s babysitting her brother's children, watering her neighbor's plants or taking care of her best friend's cat. Widowed for two years, her father often visits at Rosa’s home, even though he’s quite capable of taking care of himself. But the cup overflows the day he announces his intention to come and live with her permanently.

The 40-year-old Rosa, who has always lived for others, decides that the time has come to fulfill her dream: to reopen the sewing workshop founded by her mother in the coastal town of Benicassim. And since her father helped her brother and sister financially when they wanted to get married, Rosa asks for an equivalent amount from him on the pretext that she is also going to get married, in an intimate ceremony on the beach of Benicassim. However, the invitation that she sends to her boyfriend, her daughter, her brother, her sister and her father will generate many misunderstandings. Because what Rosa wants is to do is to marry herself.