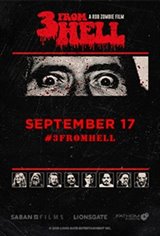 First there was House of 1000 Corpses. Then there was The Devil's Rejects. Now, Fathom Events and Saban Films bring Rob Zombie's 3 From Hell to theatres. Don't miss the next blood-soaked chapter in chapter in the Firefly family trilogy. On September 17, the event will feature an exclusive behind-the-scenes look at the making of the film.