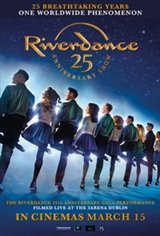 Riverdance 25th Anniversary Show is Riverdance, as you've never seen it before! A powerful and stirring reinvention of this beloved favorite, celebrated the world over for its Grammy Award-winning score and the thrilling energy and passion of its Irish and international dance.