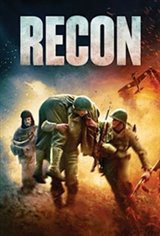 Adapted from the critically acclaimed New York Times best seller by famed author Richard Bausch, and based on a true event - RECON tells the story of four American soldiers in WW2, who after they witness a vicious murder of an innocent civilian at the hands of their platoon Sergeant, are sent on a reconnaissance/suicide mission lead by a local partisan, an elderly man whose indeterminate loyalties add to the terror and confusion that engulfs the Americans as they are hunted by an unseen enemy.