Raise Hell: The Life and Times of Molly Ivins 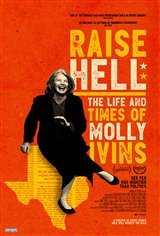 This documentary tells the story of nationally-syndicated political columnist and author Molly Ivins, who roamed the state of Texas in search of truth, justice and good stories — and found her uniquely strong political voice by bringing out the hilarity in those stories while taking on corruption wherever she found it.

She went on to join the New York Times as a political reporter and was active in the American Civil Liberties Union, often writing about First Amendment issues. A best-selling author, Pulitzer Prize-nominated journalist, and popular TV pundit, Molly had many "fans" as well as "frenemies." She courageously spoke from the heart, giving voice to people who didn't have one, even though it cost her more than once.