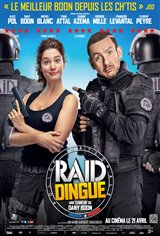 Despite her goodwill, determination and thirst for justice, Johanna Pasquali is the worst police officer ever. When she reaches the scene of a robbery, she unwittingly helps Serb criminals, known as the Leopards, to escape with their stolen goods. Even worse, she injures one of the victims and leaves her fingerprints everywhere.

Despite all these blunders, the young woman, supported by her father, Minister of the Interior, is admitted to RAID, an elite unit of the French National Police. As she becomes even more awkward and clumsy, Johanna jeopardizes RAID’s mission to put the Leopards in prison, while endangering the lives of her colleagues.