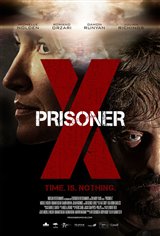 When a young man (Romano Orzari) is found unconscious behind the wheel of a crashed vehicle in Montana not far from the Canadian border, he's arrested as a terrorist, mainly because of the weapons-grade Uranium found in the trunk.

He is taken into custody and tortured, but he doesn't appear to speak English. He's kept in a secret prison two kilometres underground. One day out of the blue, the man, known as Ramiro, gives his interrogators a list of numbers and letters. When they turn out to be astronomical coordinates of upcoming Supernova explosions, and the first of those celestial events occurs exactly as predicted, they believe the man is a time-traveller from the future.

Fifteen years later, Ramiro has provided information periodically over the course of several years, even though he's still imprisoned at the same facility underground. He has told them that there were 98 "temporal jihadists" who arrived with him. His information has allowed the U.S. to wage a relentless war on terror. Several countries in the Middle-East have been invaded, Pakistan no longer exists and India is next on the list. But the terrorists, led by a man called Abraham, remain at large.

That's when CIA agent Carmen Reese (Michelle Nolden) arrives at the prison to investigate the mysterious death of her predecessor – an interrogator who had successfully secured Ramiro’s cooperation for years. The evidence points to suicide, but could it have been murder? Carmen first needs to find out if Ramiro is who he claims to be and what his real agenda is.

Based on the novella Truth by Robert Reed.

Canadian Connection: Filmed in Toronto, Ontario. Most of the cast members are Canadian.