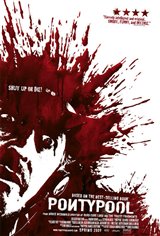 Shock jock Grant Mazzy has, once again, been kicked off the Big City airwaves and now the only job he can get is the early morning show at CLSY Radio in Pontypool, Ontario, which broadcasts from the basement of the small town's only church.

What begins as another boring day of school bus cancellations, due to yet another massive snow storm, quickly turns deadly when reports start piling in of people developing strange speech patterns and evoking horrendous acts of violence start piling in. But there's nothing coming in on the news wires. Is this really happening?

Before long, Grant and the small staff at CLSY find themselves trapped in the radio station as they discover that this insane behaviour taking over the town is actually a deadly virus being spread through the English language itself.

Do they stay on the air in the hopes of being rescued or, are they in fact providing the virus with its ultimate leap over the airwaves and into the world?

Canadian Connection: Filmed in Toronto, Ontario. The director and many of the cast members are Canadian.