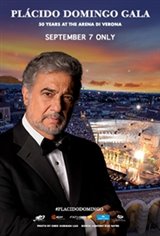 Half a century ago, Plácido Domingo made his debut at the Arena di Verona: on 16 July 1969 he sang the role of Calaf in Puccini's "Turandot"; in August followed the title role in Verdi's "Don Carlo". Since then, the world-famous singer has appeared in numerous acclaimed performances in the city of Romeo and Juliet. From the Arena di Verona comes an operatic gala concert event, captured live on August 4, 2019, marking the 50th anniversary of the debut of one of the greatest singers the world has ever known. The program features excerpts from three famous operas by Giuseppe Verdi: Nabucco, Macbeth and I due Foscari - September 7 only.