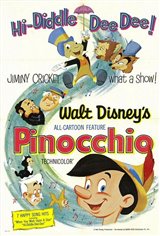 Jiminy Cricket tells a story that begins with a woodworker named Geppetto, who carves a wooden marionette. Geppetto names the puppet Pinocchio and wishes on a star that his creation becomes a real boy. During the night, a Blue Fairy visits and with a dash of her wand, brings Pinocchio to life. She tells him that if he proves to be brave, truthful, and unselfish, he will become a real boy.

Geppetto sends Pinocchio to school, but the puppet boy is tricked into performing in a puppet show as a marionette without strings. Afterwards, when he wants to go home, he's locked in cage. Jiminy Cricket tries to free him, but finally they have to rely on the Blue Fairy. Pinocchio lies to the Blue Fairy about how he ended up in this predicament, but to his horror, his nose grows with each lie. When he promises to be good from now on, she returns his nose back to its original form and sets him free, but warns him she can no longer help if he gets into trouble.

When Jiminy and Pinocchio return home, they find Geppetto gone. They go out to find him and Pinocchio has to draw on all his bravery to help rescue his creator.