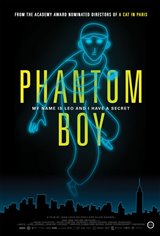 Leo, 11, spends his days in bed in a New York hospital due to a serious illness. He discovers he has an extraordinary ability to separate from his body and fly over the city while his physical body sleeps. Along the way, the boy meets Alex, a detective who has been in a wheelchair since he was the victim of an evil mob kingpin.

This crime boss has since taken control of New York City’s power supply and threatens to take full control using a computer virus unless the mayor does what he says within 24 hours. To counter this sinister machination, Leo, a.k.a. "Phantom Boy," joins Alex and Alex’s girlfriend, a fearless reporter named Mary, to thwart the criminal’s plan.