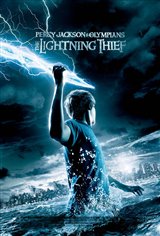 Trouble-prone Percy Jackson is having problems in high school—but that's the least of his challenges. It's the 21st century, but the gods of Mount Olympus seem to have walked out of the pages of Percy's Greek mythology texts and into his life. Percy has learned that his real father is Poseidon, god of the sea, which means Percy is a demigod—half human, half god. At the same time, the powerful gods on Olympus are feuding, which could launch a war enveloping our entire planet.

Now, Percy must prepare for the adventure of a lifetime, and the stakes couldn't be higher.

With ominous storm clouds brewing over Earth and his own life now in peril, Percy travels to a special enclave called Camp Half Blood, where he trains to harness his newly discovered powers and prevent a devastating war among the gods. There, Percy meets two fellow demigods—the warrior Annabeth, who is searching for her mother, the goddess Athena; and his friend and protector, Grover, who is actually a brave but untested satyr. Grover and Annabeth then join Percy on an incredible transcontinental odyssey that takes them six hundred stories above New York City (the portal to Mount Olympus) and to the iconic Hollywood sign, under which burn the fires of the Underworld. At journey's end rests the fate of the world—and the life of Percy's mother Sally, whom Percy must rescue from the depths of Hell itself.