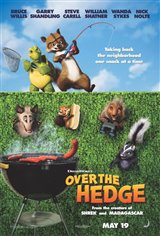 Spring has sprung, and Verne (Garry Shandling) and his woodland friends awaken from their long winter's nap to discover that a tall, green "thing" has mysteriously cropped up right through the middle of their home. Enter RJ (Bruce Willis), an opportunistic raccoon, who explains that the world beyond the hedge is the "gateway to the good life" where peculiar creatures called humans live to eat, rather than eat to live.

Suspicious and even a little jealous of RJ, the ever-cautious Verne wants to keep his blended family safely on their side of the hedge. But, proving the adage that one man's garbage is another man's -- or rather animal's -- treasure, the manipulative RJ tries to convince the woodland band that there is little to fear and everything to gain from their over-indulgent new neighbors. Eventually, RJ and Verne form an unlikely friendship as they learn to co-exist with -- and even exploit -- this strange new world called suburbia.

Based on the popular comic strip by Michael Fry and T. Lewis.